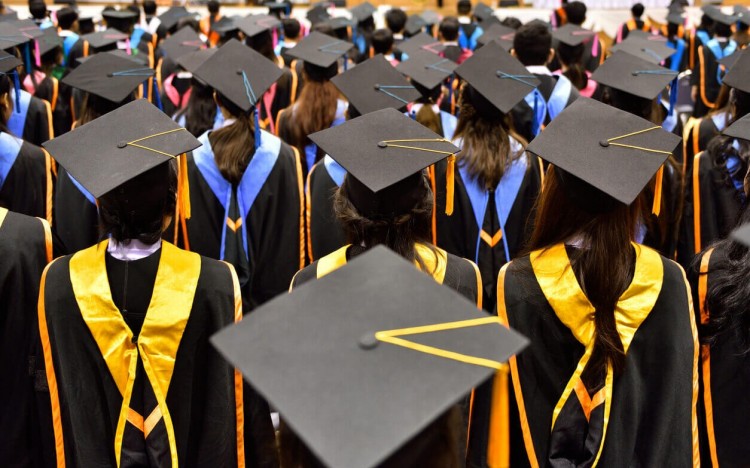 MBA degrees cost a lot of money. Harvard’s MBA will set you back by $150,000 in tuition fees alone. But increasingly, it looks like the heavy investment is worth it.

In the United States, starting salaries for MBA graduates after business school have hit a record high this year—that’s according to new data from the Graduate Management Admission Council’s Corporate Recruiters Survey 2019.

According to GMAC, the median annual base starting salary US employers plan to offer new MBA hires in 2019 is $115,000, more than double the median for new bachelor’s degree hires.

GMAC’s report is based on survey of 1,202 employers of graduate business school students in 45 countries worldwide and covers hiring patterns for graduates across programs—MBA and specialized masters—industries, and regions.

Here, we highlight how MBA salaries are changing around the world; we report on MBA and masters hiring trends; and we tell you which countries are most welcoming when it comes to hiring international students. Clue: it’s not the US.

Read on or skip to a section by clicking one of the links below:

Average MBA starting salaries vary considerably by world region. The median annual base salary that European companies plan to offer new MBA hires this year is $95,000, and the median for Asia-Pacific companies is $45,000—less than half of what’s on offer in the US.

Employers in the Asia-Pacific (63%) and the US (56%) are more likely to plan to increase MBA starting salaries this year compared with European employers (49%).

Among US employers, median MBA starting salaries are highest in the consulting ($135,000) and finance ($125,000) industries, consistent with global trends. Employers in the Northeast tend to offer the highest salaries, with lower salaries in the South.

Signing bonuses are offered by more than half of US companies (58% with an average signing bonus of over $10,000) and about a third of companies Europe and the Asia-Pacific. Benefit packages vary by world region.

Although masters degrees are becoming more popular, MBA graduates—usually at a later stage of their careers—can expect to earn more. While US companies plan to offer a median annual base starting salary of $80,000 to Master in Management hires, European employers plan to offer only $35,000, which is equal to what they plan to offer bachelor’s hires.

In February, we highlighted the business schools with the highest MBA salaries. US schools—like Stanford GSB, Harvard Business School, and Wharton—dominated the top tiers, while INSEAD, CEIBS, UK schools, and an Indian school also featured.

As well as rising MBA salaries, more companies plan to hire MBAs this year compared with those that actually hired talent 2018, although some of this year’s hiring projections are lower than last year’s

Nearly nine-in-10 (87%) companies in the Asia-Pacific plan to hire MBAs in 2019— the highest share of any world region, though down slightly compared with last year’s projections. 77% of US employers plan to hire MBAs this year, although projections are down for the second consecutive year.

Demand for MBAs in Europe is going up. Nearly seven-in-10 European companies plan to hire MBAs in 2019, up from 2018’s projections.

MBA hiring demand is strongest among companies in consulting, energy, healthcare, and technology. Consulting is the most common job for new MBAs in the Asia-Pacific and Europe, while strategy and finance are the most common in the United States.

The top three job functions companies plan to fill with MBA graduates this year are strategy and innovation, finance, and business intelligence and analytics.

Like MBAs, more companies globally plan to hire Masters in Managementgraduates this year, compared with those that hired talent 2018, although this year’s projections are lower than last year’s.

One of the key differences between MBAs and Masters in Management degrees is their popularity and reputation among employers in the US.

While the majority of companies GMAC surveyed outside the US plan to hire Master in Management talent in 2019—including 69% in the Asia-Pacific and 67% in Europe—hiring rates in the US are notably lower at 33%, and that’s consistent with previous years.

Hiring projections for specialized business master’s graduates—including those from Master of Accounting, Master of Finance, and Master of Data Analytics programs—are generally on the rise in the Asia-Pacific and steady in Europe and the US.

Getting international experience is important, but international applicants should also consider how friendly a market is to hiring them when selecting a business school.

GMAC research shows that while international hiring is on the rise among Asia-Pacific and European companies, US companies continue to pull back. 40% of US companies hired internationals in 2018, down from 45% in 2017 and 51% in 2016.

Among US companies, the reasons given for not hiring international talent include: the availability of domestic talent (32%); legal reasons and paperwork (31%); cost (29%); and visas (25%). US employers are most likely to cite uncertainty about future changes in government policy as another key factor, at 25%, compared with those in Europe (15%) and the Asia-Pacific (11%).

While US business school campuses still represent a warm and welcoming environment for international students, the turbulent hiring market has led many applicants to consider business schools elsewhere.