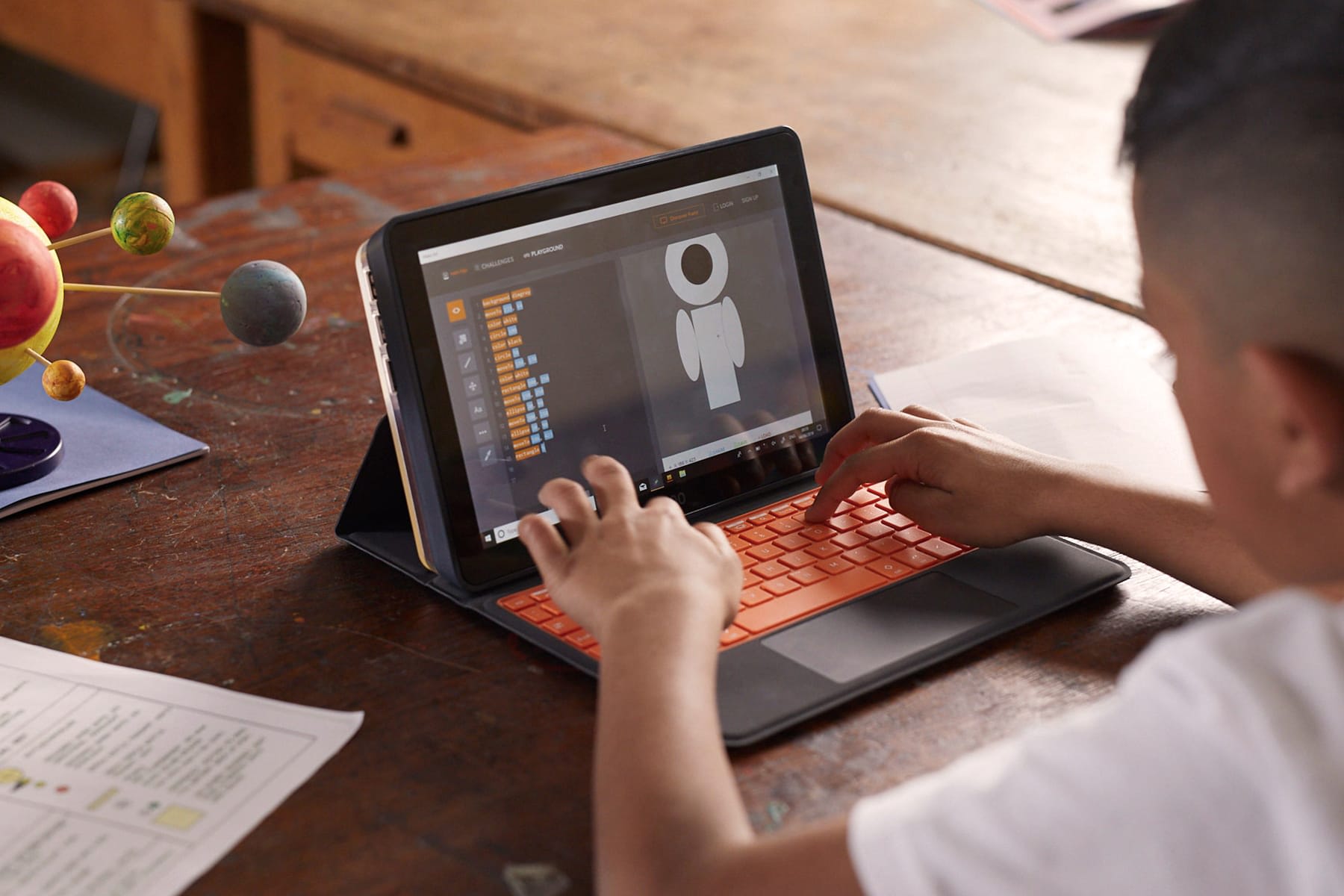 Kano is graduating from Raspberry Pi boards. Today, the company is announcing a partnership with Microsoft and unveiling its first build-it-yourself computer that officially runs Windows 10. The aptly-named Kano PC is housed in a central unit that is visually similar to its ‘complete’ Computer Kit Touch. All of the components are different, however. The new machine has an 11.6-inch touchscreen with a yet-to-be-disclosed resolution. It’s powered by a 1.44 GHz, quad core Intel Atom x5-Z8350 processor, paired with 4GB of RAM and 64GB of onboard storage, which is upgradeable through a microSD slot.In short, it’s a proper computer.

The Kano PC will have plenty of ports, too, including HDMI, two USB ports — one 2.0, the other 3.0 — and, thankfully, a 3.5mm headphone jack. It will also come with a keyboard cover which, at first blush, looks like a massive improvement over the plastic keyboard that shipped with previous Kano computers. When all of the pieces come together, the Kano PC looks like a kid-proof Surface Go. That, I suspect, was absolutely intentional. You still have to build the computer, which Kano explains through a LEGO-inspired ‘storybook.’ Some of the parts are replaceable, too, so teachers don’t have to buy a whole new system once the battery and speaker finally perish.

“This is the most complex product development process we’ve done to date,” Alex Klein, co-founder and CEO of Kano told Engadget.

It wasn’t just the physical design, which required a bunch of custom parts, that posed a challenge. Kano needed to jump through a number of licensing, sourcing, testing, privacy and parental control-related hoops to become an approved Windows partner. “The benefit of Linux is that it’s easy for anyone to hack anything together and get started right away,” Klein said. “But if you want to create something that has, not only that intimate and immediate hack-ability, but also transferability into a classroom, you need to go through all those steps.”

It’s a big departure for Kano. For years, the company has developed Kano OS, a Raspberry Pi-compatible operating system based on Raspbian OS. That platform is a colorful and, most importantly, approachable shell for its learn-to-code software and a sparse, but functional app store. “We’ll definitely keep it alive,” Klein added. “And the content that’s on it, has over the last few years become transferable to other platforms. So we’re not going to be abandoning the Raspberry Pi [platform].”

“They want a device that can run Netflix [and] Fortnite.”

The Kano PC, meanwhile, runs Windows 10 in “S Mode,” a streamlined version that leans on Microsoft Edge and only allows apps from the Microsoft Store. And, of course, it will run the Office suite. “People want a real computer,” Klein said. “They want to have a device that can run Netflix, a device that can run Fortnite, a device that is comparable to the higher-priced ones, even if they are shopping at below 300 dollars.”

The system is clearly designed for the classroom. Microsoft and Kano say they will support customers with “hundreds of hours” of computer science content. In addition, Kano has prepared an “exclusive” app, called How Computers Work, that will teach users exactly what happens when they tap a key, touch the screen or speak into the microphone. It will be joined by the Kano App, which is already packed with coding activities, Minecraft: Education Edition and Slack rival Microsoft Teams, among other software.

The goal, Klein said, was to make a product that didn’t force teachers to make a choice. “You get a computer and it’s also this end-to-end coding and making experience,” Klein said. “Rather than suggesting that you have to buy a Raspberry Pi- based computer and put that in the corner of the classroom, and then also have your Windows computers or Chromebooks for the rest of the curriculum. [We’re] trying to unify that into one experience.”

Klein compares the Kano PC to a full-size bicycle that also comes with training wheels. Eventually, owners will grow out of the introductory software and discover a system that can still run creative and industry-standard applications, such as Photoshop.

Kano crowdfunded its first build-your-own computer in late 2013. The company returned to the platform for a trio of physical computing kits — two of which are yet to materialize. (Klein said the speaker is coming “soon,” but admitted the company “doesn’t have a solid release date” for the camera.) Since then, though, it’s shipped a cheaper Motion Sensor Kit, the aforementioned Computer Kit Touch and the Harry Potter Kano Coding Kit, which lets you build a wand and program spells with a companion app. The company has also teased a Star Wars-themed kit for later this year.

The Kano PC is available to pre-order now for $299.99/£299.99 through Kano.me and, soon, the Microsoft Store. It will ship, and also be available through brick-and-mortar stores in the US, Canada and UK on October 21st.