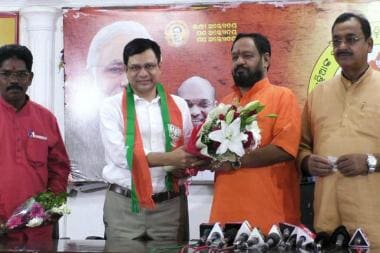 Bhubaneswar: A day after being named the BJP nominee for Rajya Sabha bypolls in Odisha, former IAS officer Ashwini Vaishnav on Saturday joined the saffron party, even as the Congress hinted at a ‘deal’ behind the ruling BJD backing his candidature.

Vaishnav, who was private secretary to former prime minister Atal Bihari Vajpayee, joined the BJP in the presence of the party’s Odisha unit president and MP Basant Panda and other senior leaders here

Shortly after the BJP named the ex-bureaucrat as its candidate for the July 5 Rajya Sabha bypolls, Odisha Chief Minister and BJD chief Naveen Patnaik announced his party’s support to him.

Vaishnav has enjoyed cordial relations with Patnaik, whose Biju Janata Dal (BJD) was an ally of the BJP during the Vajpayee era. Patnaik himself had served as a minister in the Vajpayee government before he became the chief minister of Odisha in the year 2000.

Vaishnav told reporters that it is a great opportunity for him to serve the people of Odisha again.

The ex-IAS officer said he will work for the development of the state and welfare of its people with dedication.

Dismissing suggestions about a deal with the BJD in getting its support for Vaishnav’s candidature, Panda said there is no question of any compromise as the party is committed to speedy development of Odisha.

BJP welcomes support and constructive cooperation from all to ensure the state’s progress, he said.

The opposition Congress, however, came down heavily on the ruling BJD, accusing it of maintaining a secret understanding with the BJP which was exposed with its announcement to support the saffron party’s candidate in the Rajya Sabha bypolls.

Congress stalwart and MLA Narasingha Mishra said the BJD was in a position to win the bypolls to all three vacant seats as it has 111 members in the state assembly with its present strength of 145. Therefore, the hidden ties between the BJD and the BJP have now come to the fore, he said.

Mishra said Patnaik has admitted that the prime minister and the BJP president (Amit Shah) had approached him for BJD’s support to their nominee in the Rajya Sabha bypolls.

While naming Amar Patnaik and Sasmit as BJD’s Rajya Sabha candidates, Patnaik had on Friday said that Prime Minister Narendra Modi and Union Home Minister and BJP chief Amit Shah spoke to him and his party will support Vaishnav.

Hitting out at the BJD and BJP over the issue, media cell head of state Congress, S P Nayak, claimed both the parties are now thoroughly exposed and it is clear that there is an “unholy nexus” between them.

The BJP, which has emerged as the main opposition in the state assembly, chose to seek favour from the ruling BJD, he said, adding, the Naveen Patnaik-led BJD readily extended the favour sought by the saffron party.

“It shows there is a deal between the BJD and BJP and the people of Odisha want to know the reason behind it,” Nayak said.

Another leader said the development indicates growing warm vibes between the two parties after both mounted bitter attacks against each other while campaigning for the recently held Lok Sabha and Assembly elections in the state.

Dismissing the charges, BJD leader and state Health Minister Naba Kishore Das said the decision taken by the chief minister was in the interest of the state and its people.

Even former MP Prasanna Patsani and ex-MLA R C Chyayupatnaik, who had been promised Rajya Sabha berths, said the decision to back the BJP nominee must have been taken in the interest of the state and that they welcome the move.

The bypolls will be held to the seats vacated by Achyuta Samant, Soumya Ranjan Patnaik and P K Deb. There will be no election for the seat vacated by Anubhav Mohanty.

The Election Commission issued notification for three seats as a year is left for the tenure of the fourth seat (Anubhav Mohanty’s) to end, sources said.

While Samant and Patnaik’s tenure as Rajya Sabha members is till April 2024, Deb will have to retire in July 2022. Mohanty’s membership is supposed to end in April 2020.

While the BJD has 111 MLAs in the 147-member state Assembly, the BJP has 23 MLAs and nine belong to the Congress.

The CPI(M) and an independent candidate won one seat each. Two seats – Patkura and Bijepur – are now vacant.